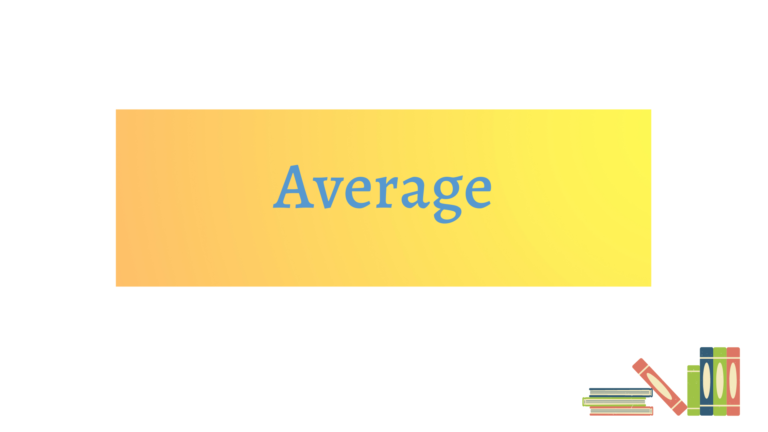 Average is one of the important topics of arithmetic and the questions from this area are asked in CAT almost every year. In this article we will discuss about averages in details.

Average means balancing of the terms. It means that when we have certain numbers with us and we want to make them all equal without changing their sum, then that equal number will be the average of all the numbers.

The above result is applicable in all the questions of average.

Ex. The average weight of 15 men in a group is increased by 1 kg when one of the men who weighs 60 kg is replaced by a new man. Find the weight of     new man.

Sol: We know that, Sum of terms = Average × Number of terms. Now, this formula can be used to get the answer.

Note: Following points should be kept in mind while solving the questions of average.

Note: In the above 2 pointers, you can see that the terms are in AP and hence the average can be found as (First Term + Last term)/2.

III. If same number is added to each of the given numbers, then the average also increases by the same amount.

Let us now consider what happens to the average of the given numbers if a number is increased or decreased by some amount.

Let us take an example where there are five children A, B, C, D and E having 10, 20, 30, 40 and 50 marbles respectively. The average number of marbles will be 30 with them. Now, what does it mean? As discussed at the start of this article that average simply means balancing of the terms which means that if we want to equate the number of marbles with these children then everyone will get 30 marbles. Now how will that happen? Here, C has his quota of 30 marbles. B has 10 marbles less than the average and D has 10 marbles more than the average. So, D will give his additional 10 marbles to B and both will have 30 marbles each. Similarly, E will give his additional 20 marbles to A and both will have 30 marbles each. Now, consider that say A got 20 more marbles from his parents. So, what will he do with these additional 20 marbles. Obviously, as they have earlier distributed the marbles equally, so he will divide these additional 20 marbles with the other children. So, everyone will get 20/5 = 4 additional marbles. Therefore, the number of marbles with each of them will be 34 and so as the average. Now, what do we learnt from here?

“If a number is increased by some amount, then that increase will be distributed on all the given numbers equally and whatever is received by each number, the average also increases by the same amount.”

You can see that the same happened in the above example also, where the additional 20 marbles obtained by A got distributed equally among all the five children and the average also increased by 4.

Now, what will happen If say E lost his 20 marbles? In this case the loss of E will be shared by all the five children. So, 20/5 = 4 is the number of marbles that will be given to E by A, B, C and D so that everyone has 26 marbles now and that is also the average numbers of marbles with them.

Hence, we can say that “If a number is decreased by some amount, then that decrease will be distributed on all the given numbers equally and whatever is reduced from each number, the average also decreases by the same amount.”

The above discussed two points are useful when we do the questions without making the equations and that really saves the time in the competitive exams like CAT, XAT etc.

In the next part, we will discuss about the change in average if a number is deleted from the group of numbers.

Remember that as per the concept of average, each one of them has 30 marbles. Now when A will leave the group, then he will return the 20 marbles back to E. So, B, C, D and E will have 20 marbles as surplus with them and they will divide them equally. So, each will get additional 20/4 = 5 marbles and total marbles with them will be 35 each and average will also become 35. So, in this case, the average increased.

Let us now consider another case where E leaves the group. In this case, A will lose the 20 marbles he got from E. Now this loss of A will be shared by A, B, C and D equally. So, everyone will share 20/4 = 5 marbles and they will have 25 marbles each. In this case the average will decrease to 25.

Weighted Average: The weighted average is the average where the numbers in the data have different degree of importance. While calculating the weighted average, each number is multiplied by the weight assigned to it and then all the values are added.

Sol: Here the number of students in each section is different, so the formula of weighted average will be used to find the average of the class.

Sol: Let the average weight of the group is x kg

Let, the average age of 3 women who joined later be x years.

Our Plan
Free Resources
Past Papers

Stay updated with the latest trends, join out newsletter here